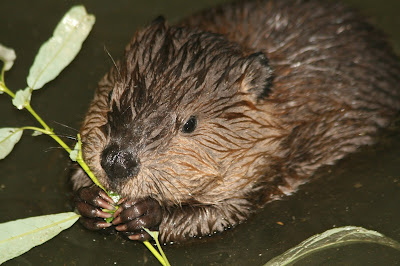 There has been a considerable amount of scientific and on-the-ground research since the previous post on Re-Beavification.  This topic was met with tremendous skepticism, and outright scorn from some during the development of the Ventura River Watershed Plan.  However, new information lends credence to the idea that re-introduction of beaver to the watershed could provide significant benefits and even resolve some of the ongoing conflict over water supply.

There is a growing understanding of the concept of "slow it, spread it, sink it" as a tool in protecting and improving groundwater resources.   In general this applies to our land management practices, where shifting away from impervious "pave it and drain it" practices helps put water back in the ground.  But just as important, we should consider how past changes in our rivers and creeks have also impacted the amount of water stored underground.

In this video, National Forest hydrologist Kami Elison explains the benefits of "Living with Beaver"

The Return of California's Golden Beaver:

Are Beavers native to the Ventura River?

Many do not realize that before the "Gold Rush" trappers scoured every nook and cranny of the state during the "California Fur Rush."  Of course the nearby Channel Islands was a treasure trove of fur seals and sea otters, but trappers also went up the rivers for beaver.  This is described in this wikipedia article on the history of beavers in California.  As part of their Bring Back the Beaver Campaign, Kate Lundquist and Brock Dolman co-authored The Historical Range of Beaver in Coastal California, a peer-reviewed scientific paper re-evaluating the historic evidence of beaver on the coast of California. Ventura County is included in this research.

Why are Beavers important?

Beavers are nature's engineer, and their removal from our coastal rivers had a drastic effect on the ecosystem.  North American beaver (Castor canadensis) are what biologists call a “keystone species” as the habitat they create benefits many other species. Their dams improve water quantity and quality, increase late season flow and reduce the impacts of flooding. Beaver bank burrows and food caches provide critical habitat for many native and endangered California species.

Here is what the Water Institute of the Occidental Art and Ecology Center has to say:

Despite these benefits, current California beaver policy solely focuses on recreational hunting and lethal nuisance management. In response, the WATER Institute launched a Bring Back the Beaver Campaign to educate citizens about the importance of beaver. In order to improve water supply for humans and the environment and increase resilience to drought and climate change, we are working to integrate their management into California policy and regulation.

In addition to the resources on OAEC's site, the Beaver Institute has a large library of technical reference on everything from biodiversity and climate change, to experiments with man-made "Beaver Dam Analogs" that have been demonstrated to restore streams.

Interestingly, visitors to the Ventura River have shown a tireless propensity for building pools in which to cool off in the hot months.  These human dams may in fact be a form of Beaver Dam Analog, slowing the flow, and perhaps even helping to increase our precious groundwater supply.

Bring Back the Beaver. Occidental Art and Ecology Center

BEAVER IN CALIFORNIA: CREATING A CULTURE OF STEWARDSHIP

The Beaver Coalition empowers humans to partner with beavers through education, science, advocacy, and process-based restoration. We are proud to be the new stewards of “The Beaver Restoration Guidebook"

Keep Me Wild: Beaver:  California Department of Fish and Wildlife

'We became beavers' : US Fish and Wildlife Service Partnering with the Scott River Watershed Council, designed a project to simulate what beavers had not been around to do for decades

The Bountiful Benefits Of Bringing Back The Beavers, NPR Weekend Edition

The Martinez Beavers: Worth A Dam

There's A Proposal To Bring Beavers To L.A. To Help With The Drought

LEAVE IT TO BEAVERS: SIGNIFICANT PARTNERS IN DEALING WITH CLIMATE CHANGE

Study: Beavers Transform Forests into Wetlands Over Many Decades

The British solution to beat flooding: Bring back beavers

Beavers set to be released in London as part of urban rewilding, Citizen Zoo plans to reintroduce animals in Tottenham as part of effort to ‘beaver up’ the capital, The Guardian, July 2, 2021 - The current law only allows landowners to release beavers if they are kept in a fenced enclosure. However, the government is developing a national beaver strategy that campaigners hope will include a roadmap for tearing these fences down

Beavers Are Firefighters Who Work for Free, Is it time to rethink beaver relocation bans?, Sierra Magazine, May 4, 2021  "sections of creek that did not have beavers were on average more than three times as affected by fire—burning a bigger area—than areas where beavers had built dams."

The Economic History of the Fur Trade: 1670 to 1870,  Economic History Association "But after the 1730s there was a decline in beaver stocks to about half the maximum sustained yield levels. The cause of the depletion was closely related to what was happening in Europe. There, buoyant demand for felt hats and dwindling local fur supplies resulted in much higher prices for beaver pelts. These higher prices, in conjunction with the resulting competition from the French in the Hudson Bay region, led the Hudson’s Bay Company to offer much better terms to Natives who came to their trading posts (Carlos and Lewis, 1999).
Rediscovering, Reevaluating, and Restoring Lost River-Wetland Corridors, Front. Earth Sci., 30 June 2021
Here, we define river-wetland corridors as a river type; review paleoenvironmental and historical records to establish their past ubiquity; describe the geologic, biotic, and geomorphic processes responsible for their formation and persistence; and provide examples of river-wetland corridor remnants that still survive. We close by highlighting the significance of the diverse river functions supported by river-wetland corridors, the consequences of diminution and neglect of this river type, and the implications for river restoration.
The beavers returning to the desert, BBC FUTURE PLANET | RIVERS, 13th July 2021
As the world heats up and extreme weather becomes more frequent, scientists have been rushing to reintegrate beavers into struggling ecosystems and dry landscapes.  Beavers used to be a prevalent species worldwide, ranging from Scotland to Spain, Syria to Russia, Canada to Mexico. The fur trade of the 1500s to 1800s saw the creatures hunted to almost extinction, but a recent resurgence of research and lobbying by conservationists has seen their numbers climb again.
Beavers aid in climate battle, local experts fight to protect species in California, KCBX Public Radio, July 27, 2021
Beaver expert Dr. Emily Fairfax said protecting these animals is crucial. She’s a hydrologist and teaches environmental science and resource management at California State University (CSU) Channel Islands.  She’s been studying a beaver habitat in the Salinas River over the past year and a half. She said she has seen the riverbed change from dry and sandy to a productive wetland.
To improve wildfire resistance, researchers look to beavers, Heard on NPR's All Things Considered, Oct 16, 2021
Last year Colorado saw the two largest wildfires in it's history, destroying hundreds of homes and 600 square miles of forest. Largely unbothered, though, are beavers, whose wet habitats offer refuge.
“A BIG WEB OF WATER ON THE LANDSCAPE” | ARE BEAVERS OUR NEW FIREFIGHTERS?" VCReporter, Nov 10, 2021
All of Ventura County is part of the historical habitat of beavers. Tsǝ’ pǝk is the Chumash word for beaver, and there are at least two places in Ventura County named after the animal. Beaver Campground and Beaver Camp are approximately northwest of the Ventura River where it nears the Pacific Ocean. Is it possible to reintroduce beavers? “It is realistic. It’s something that people are already doing in other states like Colorado,” Fairfax said. “It’s common in Washington, you can do it in Oregon.”  But not in California currently.  “It’s illegal here. You can’t move a live beaver for that purpose.”
paul jenkin
‹
›
Home
View web version